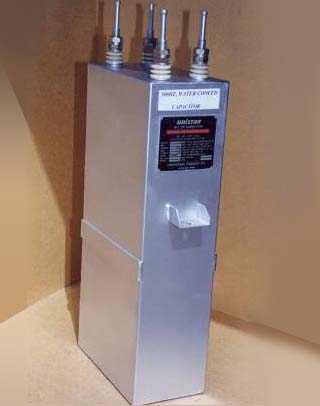 Electrical equipments are continuously subjected to abnormal voltage due to internal and external reasons. These may occur on account of lightening, switching operations, system faults and other abnormal conditions. Surge capacitors are capable of bringing down the steepness of over voltage transients that may appear across the transformers, motors and other AC line connected equipments. Unless the transients are swamped effectively, they may cause catastrophic failure of these devices. By reducing the slope of incoming surge, conventional arresters fitted in conjunction with surge capacitors, the level get truncated before operating across the insulation of a device. Surge capacitors are designed to withstand and absorb damped or oscillatory line disturbances without affecting the main frequency performance at the point of common coupling. Surge Capacitors are manufactured as per relevant IEC specifications / IS-11548/1986

Water-cooled capacitors are used in MV / medium frequency induction furnace. We have been supplying these capacitors for almost all type of furnaces used in India.

The insulation on the windings of rotating machines, such as large or small motors, a-c generators and synchronous condensers, is held to a minimum because of limited space. Also, since the insulation is not immersed in oil, its surge strength is not much greater than the peak of the 60 –cycle voltage breakdown. Special measures are, therefore, necessary to protect such equipments when it is connected to a system subject to the hazards of lighting –surge voltages Likewise, the method of grounding effects the over voltages, during fault conditions and switching, which may be impressed on rotating machines.